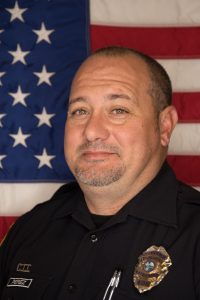 On August 4, 2019, units were dispatched in reference to a male driving a gray Chevy with the back door open, and a female attempting to jump from the vehicle. Sergeant Perez, demonstrating his alertness and vigilance, observed a vehicle matching the description of the possible kidnapping vehicle, with the left rear door open, approximately twelve blocks away from the area of dispatch. Sergeant Perez made a U-turn, and attempted to conduct a traffic stop on the vehicle, utilizing his emergency equipment. The driver of the vehicle refused to stop and continued through a red light. Sergeant Perez observed a female occupant in the rear seat of the vehicle desperately waving a white cloth out the door, in an attempt to signal for help.

Sergeant Perez continued to follow the vehicle with his emergency equipment activated. The driver continued at a high rate of speed, attempting to evade the police unit. In a calm and collected tone of voice, Sergeant Perez advised of his observations, and the path in which the pursuit was headed, as additional police units quickly joined to assist.

During the pursuit, the victim kept the rear door open, where she attempted to jump from the vehicle several times. While engaging in evasive maneuvers, the vehicle skidded to a stop, crashing into a tree. The suspect exited the vehicle, and attempted to flee the scene on foot. His attempts were futile, as he was quickly apprehended and safely taken into custody.

Further investigation revealed that the incident was indeed a kidnapping in progress. The victim stated that the suspect physically forced her into his vehicle against her will, closing the door on her leg in the process. The victim expressed that she was in absolute fear for her life, as she did not know the suspect’s intentions. She stated that she desperately tried to flag people down for help, in hopes that someone would call the police to save her.

Sergeant Perez’ experience, skills and training all came together in this dynamic situation. He displayed a great level of poise and persistence in leading the pursuit to protect the young woman. His valiant actions thwarted this would-be kidnapping, possibly saving the victim’s life.