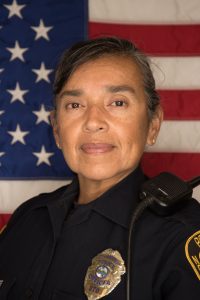 The Crime Scene Unit experienced a decrease in personnel due to attrition and was looking for volunteers from the Uniform Patrol Section to assist them in processing crime scenes. Without hesitation, Officer Elizabeth Gutierrez stepped up and volunteered to receive the training to independently process crime scenes. Shortly after receiving her training, the Keystone Point community began to experience numerous vehicle burglaries that were believed to be attributed to a subject known to wear bright red shoes. Despite conducting proactive surveillance and high visibility patrols, the subject continued to elude capture. On July 13, 2019, Officer Gutierrez responded to a call of a vehicle burglary and processed the vehicle for latent fingerprints. As a result, the latent prints that Officer Gutierrez collected and submitted to the Miami-Dade County Crime Laboratory resulted in the identification and apprehension of the burglary subject. The subject was later identified as the same subject that was wearing the bright red shoes. Due to Officer Gutierrez’s patience and attention to detail, the subject was charged with an array of charges, to include, vehicle burglary, theft, and credit card fraud. In addition, the latent prints processed by Officer Gutierrez assisted the Miami-Dade County Police Department in identifying the subject and charging him with 15 additional criminal charges that occurred in their jurisdiction.

On September 21, 2019, Officer Gutierrez responded to a scene of a violent armed robbery where three victims were terrorized and robbed at gunpoint. After a day of shopping, the three victims returned to their residence. As the driver was attempting to exit his vehicle, he immediately observed two subjects enter his yard, brandishing firearms, and wearing all black clothing. One of the subjects forcefully pushed the car door closed with an ungloved hand, preventing the driver from exiting the vehicle. The subjects robbed the victims of their personal property at gunpoint, utilizing the threat of violence while instilling fear. While on the scene conducting the preliminary investigation, it appeared that it would soon begin to rain. Fearing that evidence would have been destroyed, Officer Gutierrez quickly responded and processed the vehicle to preserve evidence. She was able to obtain a palm print from the driver side window. The print was immediately submitted to the Miami Beach Police Department’s Crime Laboratory. In addition, video footage of the subjects exiting the victims’ backyard was obtained. One of the subjects was wearing a black hoodie with a distinctive design.

The palm print taken by Officer Gutierrez matched a subject who committed another robbery, which enabled the Investigative Section to identify the subject. Subsequently, the subject was arrested at his Probation and Parole office, he was wearing the same distinctive jacket that he wore when he violently robbed the victims.

Officer Elizabeth Gutierrez’ quick response and willingness to assist our Crime Scene Unit, resulted in the apprehension of a violent armed robbery subject and a burglary subject in the Keystone Point community. The apprehension, and subsequent arrest, of these criminals allowed the victims the opportunity to feel safe and secure in their neighborhoods, while preventing these criminals from victimizing other North Miami residents.