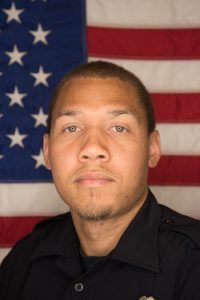 Officer Bernadeau advised of the suspect’s description and their direction of travel over the police radio. Backup officers saturated the area to assist in locating the suspects. The driver and one of the passengers were quickly located due to Officer Bernadeau’s quick and accurate dissemination of information and identification.

Officer Bernadeau should be commended for his quick thinking, and his ability to respond in such a poised manner to a dynamic situation. Officer Bernadeau’s actions prevented a potential crash, led to the apprehension of two wanted suspects, and the recovery of a stolen vehicle.