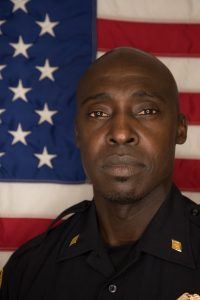 On January 19, 2018, Sergeant James Mesidor observed a Ford Mustang driving slowly while he was in route to roll call. Being aware of the recent robberies in the area, Sergeant Mesidor followed the vehicle and conducted a records check of the tag. His suspicions were rewarded when the check revealed that the tag had been stolen. In an unmarked vehicle, Sergeant Mesidor requested assistance by a marked police vehicle to conduct a traffic stop, as he continued to follow the vehicle. The vehicle traveled northbound into Broward County, and a Miramar Police Officer arrived to assist Sergeant Mesidor. The Miramar Officer turned on his emergency lights, and then the driver abruptly turned into a parking lot, in an attempt to flee, and lost control of the vehicle and crashed.

Sergeant Mesidor, relying on his years of experience, anticipated the subject's actions and tactically positioned his vehicle and himself in the safest position to block any overt movement by the subjects. As the driver attempted to flee on foot, a gun fell from his waistband. Sergeant Mesidor sprinted after the subject in a foot pursuit and successfully captured the subject, taking him into custody. The firearm recovered had been reported stolen out of Miami-Dade County. Sergeant Mesidor's vigilance, alertness, and his keen sense of observation thwarted the two felons from committing another crime