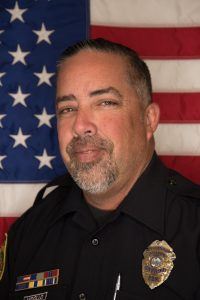 On March 8, 2018, while working at TNT Marina, Officer Dagoberto Andollo observed a crowd of marina employees gathered at a lunch truck that makes daily deliveries. While Officer Andollo was walking toward the marina office to complete paperwork, he observed a man gasping for air. Several people from the crowd were striking the man on his back attempting to dislodge something that was stuck in his throat. These attempts were unsuccessful and the man fell to the ground. Officer Andollo raced to the fallen man and heard faint breathing sounds coming from his mouth, then suddenly, his breathing stopped. Knowing that this man's life was in danger, Officer Andollo sprang into action.

Officer Andollo ordered the crowd to stand aside while he lifted the man off the ground. Officer Andollo resorted to his training and positioned himself behind the man and began the Heimlich maneuver. While holding the man's entire body weight, Officer Andollo performed numerous abdominal thrusts until a large piece of food exited the man's mouth. Suddenly there was a large gasp of air from the man. Officer Andollo successfully cleared his airway and the man began breathing normally, on his own.