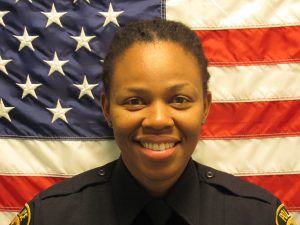 On April 21st, 2018, Officer Kamesha Moffatt observed a suspicious vehicle. A records check of the tag revealed that the vehicle was stolen. Officer Moffatt followed the vehicle, at a safe distance, and requested back-up to conduct a felony stop. With the assistance of back-up units and the Miami-Dade Police Department's Aviation Unit, a felony car stop was conducted, and the subject was taken into custody without incident. A records check of the subject revealed an extensive violent criminal past. The subject was arrested and charged with Grand Theft Auto and Driving with a Permanently Revoked Driver's License. The stolen vehicle was later returned to the owner.

On April 22nd, 2018, two subjects approached a victim in the stairwell of an apartment building. Both subjects, one of which was armed with a baseball bat, threatened to beat the victim and demanded the victim's property. As the first subject held the baseball bat in an aggressive manner, the second subject reached into the victim's pockets and stole his cell phone, then fled on foot. The victim, in fear for his life, immediately dialed 911.

Officer Moffatt immediately responded to the scene and quickly obtained a description of the subjects. Collaborating with other officers, she conducted an area canvass of the apartment building. Two people matching the description of the subjects were located within the apartment building and detained. One of the subjects, who was a convicted felon, was armed with a large tactical knife, and both subjects had a violent criminal history. Each subject was positively identified by the victim, arrested, and charged with Armed Robbery and Possession of a Weapon by a Convicted Felon.

On April 6th, 2018, Officer Moffatt responded to a 911 call regarding a violent dispute. As she and other officers arrived, they encountered a female subject who had been involved in the dispute, walking in the middle of the roadway. When the officers approached her, the subject became belligerent, aggressive, and hostile. She was quickly detained for further investigation.

Officer Moffatt's training, alertness, empathy, and dedication to duty resulted in the arrest of three violent subjects within a three-day span. These arrests led to the recovery of a weapon, narcotics, and a stolen vehicle. Most importantly, Officer Moffatt prevented a suicidal subject, who was in crisis, from causing serious injury to herself. Officer Moffatt is a true representation of the North Miami Police Department. She conducts business in a professional, respectful, and empathetic manner.