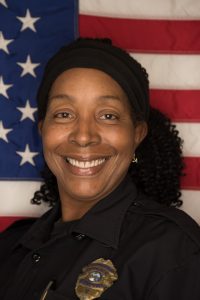 Due to no response from anyone inside, Sergeant Jones' extensive police experience, an imminent concern for the Veteran's life and the officers at the scene, lead her to have all units take perimeter points around the home and request an officer respond to the scene with a bullet-proof shield. While this was occurring, Sergeant Jones obtained a telephone response from the Veteran and began negotiating with her to exit the home. Initially, the Veteran indicated that she did not want to talk and hung up the phone. Thereafter, a gunshot was heard from inside the home, which Sergeant Jones immediately advised over the police radio to alert those responding. At this juncture, Sergeant Jones was increasingly concerned for the Veteran's welfare and the uncertainty of the situation unfolding, as she did not know who fired the gunshot, the exact location where it was discharged inside the home, the type of weapon, or the intention behind it. While continuing to dial the Veteran's telephone number, Sergeant Jones adeptly transitioned the situation into one requiring a higher tactical response and secured a perimeter, staging area, SWAT response, and a communication channel.

Given Sergeant Jones' repeated attempts to make contact with the Veteran, she was able to get a response once again. Sergeant Jones was then able to use her great crisis negotiation skills to keep the Veteran on the telephone and build rapport with her. Shortly thereafter, the Veteran admitted to Sergeant Jones that she shot herself in the stomach, was in pain and that her firearm was jammed, which meant that she was possibly still manipulating the same. Sergeant Jones, who judiciously had Miami-Dade Fire Rescue on standby nearby to assist, persuaded the Veteran to open the door to receive medical care, and she established the firearm location for everyone's safety. Once officers made entry, the Veteran was located on the floor with a gunshot wound to her abdomen, and the firearm was in a safe location. Because Rescue was already standing by to assist, the Veteran was able to obtain swift medical assistance and transport to the nearest hospital, where she underwent surgery to save her life.