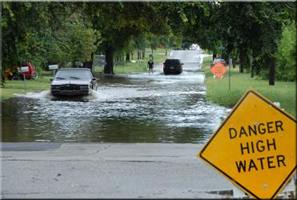 raverse the city of North Miami. The majority of our storm sewer system empties and discharges toward one of these four waterways or the Biscayne Bay, which connects directly with the Atlantic Ocean. The waterways are influenced by tides that contribute to drainage and flood problems in the City. When there is a high tide or heavy rainfall, the storm sewer system will rapidly fill-up from surface run-off and tidal waters. This could cause flood conditions in our streets, swale areas and lawns.

Your property may be elevated high enough which explains why you may not have experienced flooding. However, this may change in the future. Hurricane Andrew (1992), was not a wet hurricane as compared to Hurricane Irene (1999) which registered 13 inches of rain in Miami-Dade County in a 24-hour period. In 2000, continuous rainfall from the October 3 “No Name” storm deposited more than 19 inches of rain in a 24-hour period. This storm inundated local canals and waterways, and caused unprecedented residential property damage and destruction for what was originally forecast as a  severe area thunderstorm. And more recently, in 2017, Hurricane Irma produced up to 27 inches of flood water in flood prone areas in the City.